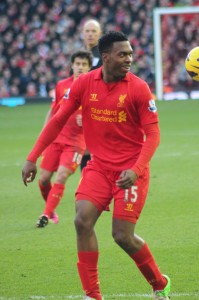 It began  a good day for Liverpool as it saw Kenny Dalgleish return to a position in the directors’ box at Anfield. Liverpool started the game in their recent favoured 3-5-2 formation, Martin Skrtel joined by Sakho and Toure in the centre of defence. The missing Lucas was replaced by Jordan Henderson in the centre of midfield and Raheem Sterling took his place on the right hand side. Liverpool started the game very positively, immediately seizing control of possession and putting the struggling Crystal Palace on the back foot. It wasn’t long before we broke the deadlock. After thirteen minutes, Suarez, fallen off his feet in the box, latched onto Jose Enrique’s ball and slipped it into the net. To complete the devastating force of our SAS, Daniel Sturridge soon afterwards made it two with a cracking left foot strike into the bottom corner. Crystal Palace responded well to the early pressure and for the next ten minutes made Liverpool defend. We looked a bit shaky at the back and it required a spectacular save from Simon Mignolet to secure our clean sheet, denying a good attempt from Puncheon. In the thirty-sixth minute, Raheem Sterling, heading into the Anfield Road end penalty area, fell after a minor touch from Moxey. Penalty awarded and the captain, Steven Gerrard, stepped up to fool the keeper into diving the wrong way. Before halftime Victor Moses was thwarted by the crossbar. It was 3-0 and liverpool’s relentless attack had sealed a comfortable position ahead of the second half.

Crystal Palace dug in, second half, and made life a bit more difficult for the Redmen, who to be fair had probably taken their foot off the gas a little. The game moved back and forth with a fairly even allocation of possession and territory. Daniel Agger came on for Mamadou Sakho and Victor Moses made way for Luis Alberto. Raheem Sterling was having a good game down the wing and was causing all sorts of problems out on the right. In the seventy-sixth minute Gayle, for Crystal Palace headed a cross into the box, past the Liverpool keeper. It was initially reported as a Gerrard own goal, such was the confusion. Liverpool’s attack kept breaking down with misplaced passes. Daniel Sturridge hit a cracking volley which spun back off the inside of the post, so unlucky not to make it a brace. He was substituted afterwards for Iago Aspas, his work for the day well done. After four minutes of extra time, the ref drew the game to a close. It was a solid performance with a  3-1 victory, sending Liverpool back to the top of the league. We made 619 passes to the Eagles’ 383. Let’s hope now, that the forward momentum we have built back up, doesn’t fall apart in the forthcoming international break, like it did last time we reached the summit.

Man Of The Match: Daniel Sturridge – unlucky not to get two goals, Sturridge looked sharp as ever, his scoring form continuing. He is the top scorer in the campaign so far.