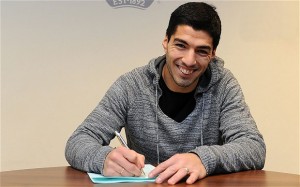 The game began with Liverpool retaining their lineup from the previous weekend. For Cardiff, Craig Bellamy didn’t make the starting eleven. Early on the game seem fairly balanced. Luis Suarez got on the ball in the penalty area twice, the second being a good opportunity after Raheem Sterling did very well to get ahead and set it up nicely for the captain. After about ten minutes Liverpool began to turn the screw and became dominant in possession, forcing the visiting Welsh side to defend. They set up some counter attacks though and Craig Noone forced a good save from Simon Mignolet in the fifteenth minute. Luis Suarez and Raheem Sterling both had good efforts on goal but Cardiff were organised in defence and battling hard.

Cardiff’s resolve lasted until the 25th minute when, who else, but Luis Suarez stepped up to wonderfully strike a left-footer bang into the back of the net.Unplayable is an understatement. Philippe Coutinho had a moment of magic, seeing a gap next to the keeper and unluckily striking the post. It wasn’t all one way traffic though and Cardiff showed good discipline in their set up. Martin Skrtel had a good header from a set piece that skipped over the crossbar. Liverpool were playing well as a team and lots of players were getting forward. Jon Flanagan almost scored another goal with it being cleared off the line… Brendan Rodgers nomination of him for the Ballon D’Or may not be so far-fetched! Raheem Sterling seemed to be one of our most effective players, and although his final pass or cross could do with some work, his blistering pace gets him into good positions. A little work on his finishing too and he could prove a very valuable asset. With a few minutes until half-time a beautiful break by the Liverpool forwards saw a two on one situation with the keeper. Luis Suarez unselfishly gave the ball to Raheem Sterling who had an easy conversion. The Suarez show rolled on and at the stroke of half-time, an indescribable curling shot just went around everyone and into the goal. It’s as if the guy has magnets set up in the net at the moment. Nobody can stop Luis. 3-nil half-time and Cardiff need a miracle or to kidnap Luis and force him into a Blue shirt….

In the second half it was one-way traffic. Chance after chance was falling to Liverpool. In the fifty-seventh minute a substitution Malky Mackay had made, paid off. Jordan Mutch headed home from close range, the Liverpool defenders disappointingly doing little to counter him. It was a fightback of sorts. Could Malky Mackay defy all the odds? The goal spurred Cardiff on and they started to create some more chances. Cardiff were tenacious and succeeded in reversing the possession and territory that had characterised the game so far. Mignolet was on high alert and managed his goal well.

Cries of ‘Go Back To Malaysia’ rang out around the ground, directed towards the unpopular Cardiff City owner, Vincent Tan. At the end of the day, despite the scoreline Cardiff were looking a strong side and were doing well. They were a credit to their manager and had Vincent Tan allowed for better preparation ahead of the match, maybe Cardiff could be doing even better?

Raheem Sterling managed to join Martin Skrtel in the ref’s book. The sustained pressure was, in a way doing us some good. We are likely to face long periods off the ball against Manchester City and Chelsea. the young man almost added to his goal tally. One on one with the keeper, Sterling just mis-controlled it a little and muffed the opportunity. Luis Suarez hit the post on the follow-up.

Cardiff made three attacking substitutions in an effort to get something from the game. They certainly hadn’t given up. Cautiously, Rodgers took off Coutinho and replaced him with Daniel Agger. Coutinho looked quite lively and had a good game. The Bluebirds had some big players up front and most of their attacks tended to be high long balls in with some physical aerial challenges.

The game reached its conclusion with no further score. The result suggests a comfortable victory but the game was quite even really. We won it in the first half and put it beyond the Premiership newcomers. I just hope that we aren’t held responsible for wrongly prematurely ending another manager’s career. Cardiff did their manager proud and playing they way they did I cannot see staying in the league being a problem. If Vincent Tan wants magic then maybe he’d be better retaining his manager and going out to seek a superfluous South American striker. That would be a positive move for the Cardiff City fans.

Liverpool go top and it’s comforting to see them there. I think that the next two games could be decisive for the season and give us a true indication if we have true title pedigree.

Man Of The Match: although I think Raheem Sterling performed very well, it is hard not to give this award to Luis Suarez. In a week where he gave every Liverpool fan a welcome Xmas gift by signing a new contract, Suarez showed clearly how lucky we are. He set up a goal and scored two himself, the second being truly world class. He was the difference between the two sides and is yet again the Gerrard The Red man of the match.