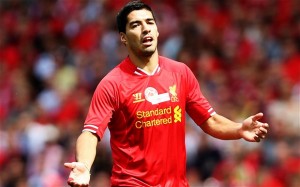 Liverpool kicked off the match reverting to their more typical 4-4-2 formation. Daniel Agger had a recall in the centre of defence, pairing up with Martin Skrtel. Aly Cissokho retained his place as left-back and Glen Johnson returned on the right. Philippe Coutinho was our additional midfielder, making a welcome return.

Right from the outset, Liverpool demonstrated their intentions by setting up camp in the Fulham half. Defensively Fulham looked very weak. They weren’t pressing the ball at all and had a very shaky formation. they just seemed interested in getting men behind the ball and banks of defenders built up to wait for Liverpool mistakes and to hack the ball away.

It seemed as though Coutinho would be more advanced and it was more like a 4-3-3 formation from Liverpool. The side were certainly very positive and were passing the ball around really well, with Jordan Henderson and Steven Gerrard in particular, dovetailing nicely and creating lots of good attacking opportunities. Luis Suarez came closest to breaking the early deadlock, moving nicely into the box, but being denied by Fulham keeper, Maarten Stekelenburg.

In the twenty-third minute, Steven Gerrard lifted another of his perfectly executed free-kicks into the box. It connected with Luis Suarez’s head and was knocked into the back of the net by Fulham player, Fernando Amorebieta. Liverpool deservedly had the lead. Three minutes later and that lead was doubled when Martin Skrtel rose to head home a Steven Gerrard corner. liverpool were rampant with over two thirds of possession and the vast majority of the territory. There were lots of skills flowing, with Philippe Coutinho regularly outclassing the lacklustre Fulham defenders. In the thirty-sixth minute an awesome crossfield pass from Gerrard was slotted through to Luis Suarez by Jordan Henderson. It was a perfectly executed pass and Luis Suarez, in a rich goal-scoring vein, had little hesitation when slotting it past the Fulham keeper.

Martin Jol and the Fulham bench looked on desolate and the Fulham players looked relieved at the half-time whistle. Liverpool had enjoyed 70% possession and a return from this result looked out of the question.

As soon as the whistle blew Liverpool were straight on the attack. Daniel Sturridge had his turn in front of the keeper and was unlucky not to score and Suarez latched onto the rebound to no avail. Sturridge has looked a bit shaky in front of goal the past few games and today was no exception. Still, him, Gerrard, Coutinho and Suarez were making mincemeat of the poor Fulham side. They were just gliding past them. If Liverpool hadn’t have taken their foot off the gas, then this game could easily have been a complete rout. In the fifty-fourth minute Gerrard picked out Suarez’s run and in a one-on-one with the keeper, he easily beat him to bag his brace.

At 4-0 it made sense for Brendan Rodgers to rest some key players. Aly Cissokho was replaced by the returning Jose Enrique, Joe Allen came on for the captain, Steven Gerrard, who’d had a forceful impact on the game, and Daniel Sturridge made way for Victor Moses. Fulham made a few changes but the game was well beyond them. From the start of this match they hadn’t looked at all if they were bothered about playing or getting a result. The bench was static throughout and Jol’s odds to be the next sacked manager must surely have strengthened.

The game closed out as a 4-0 victory and a favourable result of a draw in the Chelsea West Brom game means that Liverpool regain second in the league, with Arsenal still maintaining a two point lead and have to play Man United tomorrow.

Again, we go into an international break in a strong position. Let’s hope our players don’t get over-exerted for their national sides and we return in a fortnight to face Everton playing as well as we have done today.

Man Of The Match: Although Henderson and Gerrard both had superb games, Luis Suarez has to be man of the match. He looked absolutely deadly in front of goal and was unlucky not to bag another hat-trick.