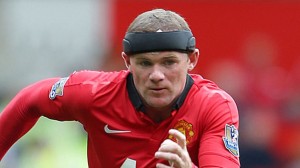 Liverpool started the match with Skrtel and Sakho in the centre, Toure right-back and Enrique on the left. The midfield remained unchanged from the Southampton game and Suarez rejoined the first team up front to partner Daniel Sturridge.

Manchester United came out of the stalls strongly and put Liverpool under a lot of pressure for the first ten or fifteen minutes. Liverpool then began to assert their dominance and had United pinned back in their own box.

The game seemed to undulate between phases where each side were on top, though neither side seemed able to pierce the defence well enough to get a decent strike on goal. There was a big battle going on in midfield with lots of pressing. Ryan Giggs ended up picking up a caution for a foul on Victor Moses and Lucas Leiva also joined him in the book for fouling Phil Jones. It was a shame that Liverpool couldn’t turn their first half pressure into goals.

Immediately after half-time, Man United broke the deadlock. Javier Hernandez latched onto a Wayne Rooney corner, leaving his marker Jose Enrique sleeping, and slotting the ball past Simon Mignolet in the Liverpool goal. We now needed to make a comeback and immediately Liverpool started ramping up their game. Liverpool had most of the possession but couldn’t convert. Shinji Kagawa turned on the ball wonderfully in midfield and, breaking through to the edge of the box, let fly with a stunning shot, forcing Mignolet into a good fingertip save. Luis Suarez started getting closer and closer, hitting a corner from the left of the area into the side netting. Victor Moses was looking really sharp, with most of the attacks going through him. He had a wonderful diving header saved by De Gea which should have really brought us level. Suarez’s fee kick had a deflection off Phil Jones and clipped the crossbar. All he needed now was a goal.

Martin Kelly came on for Liverpool, taking the place of Lucas Leiva and forcing Jordan Henderson into the centre of midfield. United started to make some changes from the bench with Hernandez and Kagawa making way for Michael Carrick and Adnan Januzaj. Manchester United were relying heavily on the counter-attack. Henderson managed to get into the book and gave away a nicely positioned free kick on the edge of the penalty area. Rooney stepped up and Mignolet made an excellent parry save from him. Only a minute later Rooney again made Mignolet stretch for a save. The balance of power was changing.

Liverpool were playing really well and getting through to the final third easily enough. Yet, they lacked composure in attack and just struggled to put De Gea under pressure. Sturridge, in particular, seemed guilty often, of misplacing the final ball.

Moving into the last ten minutes and Ryan Giggs and Jordan Henderson had a tete a tete after Giggs, already on a yellow card, kicked the ball away to waste time. Referee, Mark Clattenburg, diffused the situation with no further action. Suarez broke through into the box and delivered a ball on a plate for Kolo Toure, who just couldn’t connect properly, skimming it wide. united held on to the final whistle and claimed a much needed victory. Final score: 1-0. We had the majority of the possession but just didn’t seem to have the necessary concentration to make that possession count. It’s been three poor performances on the trot for Liverpool now. That’s one of the three available pieces of silverware for the season, firmly out of our grasp. Let’s hope we can change our fortunes against the downtrodden Sunderland on Sunday.
Man Of The Match: Wayne Rooney – he set up the goal and was the most dangerous Man United player on the pitch, playing with passion. 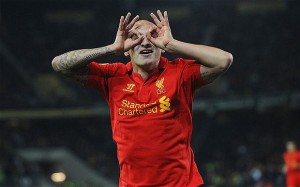 Well, it was an explosive start to the game with Shelvey proving how keen he was to show the Reds they had made a mistake in selling him during the summer transfer window. Shelvey scored in the first minute with a well-taken goal which left Liverpool newcomer, Sakho, in the shade, his premiership baptism not going particularly well. Shelvey, however, was no saviour for Swansea, as only minutes later he inadvertedly gave an easy back pass to Daniel Sturridge, whose on fire goalscoring record allowed him to suitably capitalise on his former teammate’s mistake. It was 1-1. The first half was pretty evenly balanced in terms of possession, with good passing from both teams and end-to-end action. Mignolet made a noticeable save, Skrtel made a critical last ditch goal-line tackle, and Sturridge was unlucky not to score after a perfect Victor Moses cross. Another debutant, Victor Moses was showing his strength down the wing, and he cropped up to score a beautiful goal just before half time. Liverpool went into the interval a goal to the good with the score standing at 2-1.

The second half lacked some of the vigour of the first. Coutinho picked up a nasty shoulder injury and was substituted for Iago Aspas. A key player missing no doubt for a while. Shelvey continued his keenness to prove his worth to his new club and was rewarded by setting up the very dangerous Michu, who banged in Swansea’s second goal, making it 2-2. Liverpool threatened the goal far less in the second half and it was frustrating not being able to round off a fourth consecutive victory. Mignolet has a good game overall and made some decent contributions in keeping the Swans out, but he’ll be disappointed to have lost his 100% record of clean sheets. The final whistle came after a good five minutes of injury time and a draw and one point was all that Liverpool could take. Still, Swansea isn’t the easiest of places to go in the Premiership and get a result. We aren’t going to march through the season winning every game. We have to be satisfied with the away point. It places us back at the top of the league, after four games, a point separating us from Arsenal and Tottenham. A home game against Southampton on Saturday could prove a lot easier than tonight’s fixture.

Gerrard The Red’s Man Of The Match: Jonjo Shelvey – although he was involved in both Liverpool goals through mistakes, he also had key roles in the Swansea City strikes, scoring one and setting Michu up for the equaliser. Proved how good he is as a player and left a sour taste in the mouths of Liverpool supporters.

Well, it’s been a perfect start. We have spent a good week at the top of the league and are now level on points with Spurs and Arsenal with them having played one game more than us. Three 1-0s. Ok, not the best for the fingernails, but three clean sheets, nonetheless, and 9 points out of a possible 9. We’ve been playing good football, Sturridge, in particular, has been shining and the defence looks excellent. Mignolet has made a last minute penalty save to keep us with a victory, Toure has looked exceptional, his experience shining through. OK, there’s been a few injuries, but the last minute signings of two quality defenders, should keep us in good stead. We’ll miss Johnson, though Kelly will be good cover for him while he’s out for the next month or two. We have our secret weapon, in Suarez, soon to return, and hopefully increase our firepower by dividends. He’ll be back for the league cup tie at Old Trafford, and let’s hope we can make it back-to-back victories against the Septics. We are here to challenge this season and I can honestly see us going all the way. A tough fixture next up, away to Swansea, though they’ve had a poor start. Our next big challenge in the league isn’t till we face Arsenal away at the start of November. It’s all to play for, of course, and let’s not get carried away, but a perfect start to our campaign, it’s been, and let’s keep it rolling! YNWA.