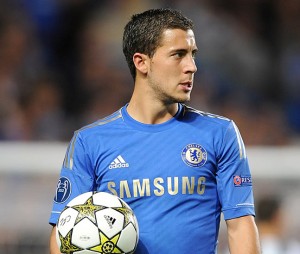 Liverpool adjusted their defence: Mamadou Sakho moved out to left back and Daniel Agger came in at centre back, Aly Cissokho losing his place and dropping down to the bench. Martin Skrtel and Glen Johnson retained their defensive positions. I can remember when we tried a non-specialist wing back earlier in the season and I’m not overkeen. Let’s hope the formula works today. The rest of the side was the same as it has been for a few games, the upper triangle of Philippe Coutinho, Raheem Sterling and Luis Suarez taking responsibilities in attack. Two minutes in and we won a free kick in a nice position out on the left. Jordan Henderson was tackled heavily by Samuel Eto’o and needed treatment. The set piece was floated in and Luis Suarez, meeting his bite victim, Branislav Ivanovic with football skills and not barbecue skills, neatly beat him to the ball, heading it towards goal where the hungry Martin Skrtel was waiting to knock it over the line. A goal up in the third minute: A perfect start! And a fine way for Suarez to avenge his ban.

Chelsea didn’t take it lying down. They were attacking us straight away and making headway. The ball was floated into the box a lot, far more than it has been from other opposition. Glen Johnson made a vital goal line clearance. Gary Cahill headed a good header wide. Simon Mignolet’s dexterity in goal was tested by a decent Frank Lampard shot. Our midfield wasn’t holding up well at all and Chelsea were cutting through us like butter. The defence looked haphazard too and, when Eden Hazard broke through with a lucky rebounded pass from Oscar that had rebounded off Sakho, the Chelsea danger man curled it nicely past Mignolet and the Blues were deservedly level. The defence was on a back foot and disorganised. Daniel Agger had actually fitted into the side at left back, not in the centre, and he was found out of position for the goal. I don’t think that, as a team, we had settled well. We weren’t controlling the game as we usually do. Perhaps Chelsea were effective in breaking up our pattern of play, or maybe something just wasn’t clicking at Stamford Bridge? Ivanovic had to call it a day and went off injured for Ashley Cole to come on in his place. Our whole formation was being pressed and our possession stats must have been unhealthy. In the 33rd minute, defensive mishaps and a failure to tackle and clear properly led a cross to be converted by Samuel Eto’o – He was lucky to reach it and Mignolet half-saved the effort, but i had enough momentum to trickle over the line.

For the second time in a week and early goal lead against had been turned completely around by the home side. 2-1 Chelsea and we will have to sort our whole effort out in this game. Before half time Joe Allen had another good shot at goal, after a rare decent attacking move from us. The Chelsea defence was set up in two fluid banks and their movement was aggressively dictating to our front how to play, rather than being passively affected by our passing and movement. It was confusing the hell out of us and was a credit to Jose Mourinho tactically. I haven’t seen a side dominate us so well as Chelsea this season, except for Arsenal. Chelsea weren’t using Arsene Wenger’s total football, but had rather a more messy, physical, ball-off-the-ground header and volley game, though their discipline and set up was very well-managed. Let’s see what Mourinho’s former apprentice can pull out of the hat in the away dressing room at half time. I’d drill Lucas Leiva and Joe Allen to turn the tide in midfield somehow, maybe remove some of the freedom Jordan Henderson is allowed and get him to help shore up our problems in terms of possession.

At half time Mourinho used as second substitute: John Obi Mikel on for Frank Lampard. Something seemed to have changed in the second half. We were having more time on the ball and looked a changed side. Mamadou Sakho rose in the box to loop a headed cross past Peter Cech, but unfortunately it clipped the corner of the goalposts and rebounded away to safety. Chelsea were resorting to very physical tackling, roughing it up a bit, John Terry leading the way. The game was a lot more open now. Luis Suarez had a long distance effort but it was kept out. He had been quiet but there were signs that Liverpool were gaining momentum.

Our weaker squad was demonstrated when Joe Allen had to retire from the game, injured. He was replaced by a 19 year old academy-trained rookie, Brad Smith, his first cap. In a game of such magnitude it isn’t the time to be breaking in new, young players, especially with the problems already manifesting themselves in midfield. We had a good appeal for a penalty with Luis Suarez getting completely clattered in the box. We were firing in free kicks regularly and there were all sorts of tussles going off in the box. Chelsea are physically large and powerful in defence. It will be hard to beat them in the air, that is for sure. The physicality of the game gives it more the flavour of a typical Merseyside derby. It’s getting quite heated out there.

Glen Johnson had a nice long effort in the 73rd minute, Cech saving at his near post and conceding a corner. No joy from the set piece though. In the 79th minute a very cynical challenge by Gary Cahill on Luis Suarez resulted in a caution for the England defender. Cech parried the free kick away harmlessly. Into the last ten minutes and another penalty call. Samuel Eto’o clearly fouled Luis Suarez and it was a penalty but Howard Webb failed to call it. I’d hate to think that two of the season’s most critical fixtures can be affected by poor refereeing. It’s easy to whinge about officials and seems an excuse for poor results: I don’t like it. However, the refs should not be impacting the league in the way that they are.

Glen Johnson was sacrificed for Iago Aspas. We need to throw all we have at the game. Eto’o limped off with Fernando Torres coming on for the last part of the match. Torres, sporting a new Coutinho-style haircut, made a move on the goal but finished weakly. Half the player that we sold. More injury woe for Liverpool as Mamadou Sakho was next to hobble off. The January transfer are getting pricier, the nearer we get. We will need many signings just to replenish our depleted squad. Kolo Toure came on. Chelsea moved the ball into the corner and started to waste time. There should be significant injury time at the end. They slowed everything right down.  A messy Brazilian clash went off, Oscar following through on Lucas Leiva. Our samba man responded with quite an aggressive push to the face and a brief scuffle broke out. Howard Webb diffused the situation without issuing any further warnings.

The final whistle came and a frustrating fixture concluded; the end result a 2-1 defeat. We are the first side to be top at Christmas and out of the top four by the New Year. These last two games were never going to be easy and unfortunately we have had the worst possible outcome to them. We can cancel out the relative points deficit by victories and Anfield against both sides but relying on this is no way to justify losing.

Man Of The Match: Howard Webb had significant influence on the outcome though the scorer of Chelsea’s winner, Eden Hazard, was probably the best player. He was a constant problem down the left hand side.