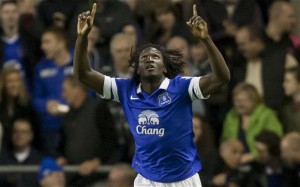 Everton started the game strongly, putting Liverpool immediately on the back foot. It was Philippe Coutinho, however, who delivered the early blow, latching onto a deep Steven Gerrard cross from the corner and delivering a well struck shot at the back post. 1-0 to the visitors after five minutes. Everton were straight back up, putting pressure on though and got their just desserts after eight minutes when Kevin Mirallas got behind the defence on a long, floating cross and banged the ball into the back of the net. Everton continued their early dominance and it was against the run of play after 18 minutes when Luis Suarez won a positioned free-kick 25 yards out. Our star Uruguayan took the kick himself and with a perfectly executed strike, curved the ball around the wall and straight past the Everton goalkeeper into the bottom corner. It was a magic free kick though Tim Howard could be criticised for not having placed the wall correctly. Everton continued to seem to be the team with the most possession and best passing after the second Liverpool goal. We seemed to be struggling to link up and make our game flow. At 31 minutes Ross Barkley, who’d been having a good game, was booked for simulation, faking a dive from a Luca Leiva challenge. A nasty foul on Luis Suarez a few minutes later from Kevin Mirallas left the referee with a bit of a conundrum. The challenge was high, with studs showing and was a potential career-ending tackle. Suarez, who had already been limping, stayed down and the ref really took his time, considering about whether to send Mirallas off or not. He eventually decided on leniency and just showed a yellow card. The game could have turned on this moment. The foul seemed to gee Liverpool up a bit and afterwards they started to have more impact and flow in their game. We can expect heavy tackles, after all it is a Merseyside derby. Half-time came soon and Liverpool go in at the break, happy to be ahead, after not their best performance.

Everton seemed to be playing well, though their attacks early in the second half were thwarted by a well-disciplined Liverpool defence, which always seemed to be holding a good position.  Mirallas put through the new Evertonian substitution Gerard Deulofeu, straight on goal. In a one on one confrontation Simon Mignolet did well to come off his line and put off the pacey attacker enough to clear the ball away. It was a good chance and Mignolet can be praised highly for saving a clear goal-scoring opportunity. I am yet to feel fully confident in our new goalkeeper arrival, though slowly his impact on games is starting to show. At the other end of the pitch, Coutinho was demonstrating his class, trying his best to make his national team coaches take note ahead of the Brazil world cup next summer. Luis Suarez worked a gap inside the opposition penalty area and unselfishly slotted the ball through to Joe Allen who unbelievably, straight in front of goal, missed his shot, sending it wide past the post. It was a gilt-edged opportunity and something which may come back to haunt us at the end of the game. Joe Allen is yet to score a premiership goal for Liverpool and he really needs to shape up if he wishes to get the backing from the fans. A couple of minutes after the missed effort and he became the first Liverpool player to enter the referees book. Romelu Lukaku managed to get through on goal and yet again Simon Mignolet proved he was in top form by coming to our rescue. It was his second one on one save with Lukaku. He could certainly be the hero today for us, our former Sunderland goalkeeper. Brendan Rodgers seemed to see sense and made a substitution, bringing on Victor Moses for the under-performing Joe Allen.

Everton won a free kick in a good position and Mignolet made another fantastic save from Lukaku, but failed to recover the ball. Lukaku remained loitering in the box and after some ricochets managed to latch onto the ball and convincingly beat his nemesis this time. Even the outstanding Belgian shot stopper couldn’t prevent the Toffees drawing level. With fifteen minutes to go the game really started to open up, becoming an end to end affair. Luis Suarez had a match-winning opportunity yet couldn’t convert a point blank header past Tim Howard. Brendan Rodgers decided to throw his all at the game and brought on Daniel Sturridge for Lucas Leiva. Liverpool were starting to ride their luck defensively and ultimately it proved too much for them. Lukaku, playing a superb game, got onto the end of a corner to head the ball straight into the top corner. With under ten minutes to go, Everton had taken the lead for the first time in the game. Glen Johnson could be criticised for the goal as he failed to mark his man properly.

Right at the death, the SAS came to Liverpool’s rescue and Daniel Sturridge latched onto yet another perfectly delivered Steven Gerrard cross. With a near post header, he cleared the ball past the keeper into the back of the net. Liverpool managed to find the net again in injury time but Sturridge was unfortunately clearly in an offside position. The final whistle eventually blew and a high-scoring 3-3 draw was the final result. I said before the game that to take a point from this fixture would be a good result for Liverpool so we mustn’t grumble. Maybe if Sturridge had’ve started the game and not ben suffering from his international duty, we could have taken all three points? Liverpool stay second, though maybe they will drop places depending on the rest of the weekend’s results.

Man Of The Match: For most of the game I had decided on awarding man of the match to Simon Mignolet, but his great performance was undone by the hot form of Romelu Lukaku whose two goals were fundamental in this critical derby fixture. Unfortunately for Everton, his brace wasn’t enough to deliver the final victory.