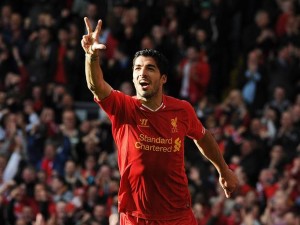 Liverpool began the game with manager Brendan Rodgers imposing three changes on the starting line-up, following the defeat at Hull City. Daniel Agger coming back in for Kolo Toure at centre back was widely expected. Philippe Coutinho was fit enough for a starting place and Victor Moses dropped back down to the bench. The big surprise, perhaps, was that Lucas Leiva was left aside in favour of Joe Allen. Maybe, a home fixture against Norwich could be a good opportunity for the young Welshman to demonstrate his abilities? Raheem Sterling kept his place ahead of Iago Aspas or Luis Alberto, and Jon Flanagan also maintained his newly-acquired left back role.

We obviously lost the toss, as the visitors were forcing us to attack the Kop in the first half. Norwich showed some initial liveliness which made the Kop stand alert as if they were going to have to dig in for the rare midweek evening fixture. Anfield always has a better atmosphere for evening fixtures, and the crowd seemed in good spirits despite the grumpiness among fans that has lingered since Sunday’s embarrassment.

Philippe Coutinho certainly seemed keen and was displaying his silky skills right from the start. For the first fifteen minutes Norwich certainly kept our attention. We were playing loads better than at the KC stadium, with our passes smooth and linking up well. Norwich though looked set to be a test. At the fifteen minute mark, our star Uruguayan, who has a most excellent scoring record against Delia Smith’s outfit, decided to conjure up something special… From out of nowhere, forty-five yards out, Luis hit a spectacular half-volley which absolutely scorched past Norwich keeper, Paul Ruddy, into the corner of the goal. It was a real contender for goal of the season and surely sent out a clear message of intent to the Canaries. They were stuck down a mineshaft for sure and gas was leaking!

The deadlock was broken but still Norwich kept their chins up and showed they were here for a game. Wes Hoolahan was one name that was never far away from the commentators tongue. Bradley Johnson managed to find his way into the ref’s book. At the half hour mark, Liverpool’s lead was to double. Steven Gerrard flicked on Philippe Coutinho’s expertly delivered  corner and set Luis up for his brace. It was a left-footed shot this time, from within the area, but struck with fantastic precision and firepower.

Joe Allen gave away a needless free kick shortly after the goal. He went into the book for his challenge and gifted Norwich a good sight on goal. Nathan Redmond took a good free kick which hit the target, but Simon Mignolet was un-phased and kept his eye on the ball to comfortably collect it. Straight back up the other end of the pitch and Luis had gained his inevitable hat-trick. He beautifully crafted a right-footed shot past the under siege Ruddy. Luis Suarez was on fire. He was untouchable and totally unplayable. With the latest goal he became the first Liverpool player in history to score three hat-tricks against the same club. He is truly sublime and we really must ensure he doesn’t ever leave our precious club.

Captain Steven Gerrard managed to make the ref’s book just before the whistle blew for half-time. Essentially it was already Goodnight Vienna for Norwich though in all honesty they had done very little wrong, bar attempt to stand up to the magic of a world class striker at his most lethal.

Chris Hughton must have been lost for words to say to his side in the dressing room. It was going to be one of those nights for Norwich. In the second half Liverpool became more dominant, bossing possession and Norwich had given up the ghost a little. Jordan Henderson own a fee kick for Liverpool in a good position 20 yards out. Philippe Coutinho took the set piece but delivered a disappointing drive which was never going to worry the keeper. Steven Gerrard came close shortly afterwards and his on target header was cleared off the line. We seemed to be co-ordinating our attacks well and linking up in the vital final third. Sterling was doing his fair share and even Joe Allen stepped up and narrowly missed receiving his first ever league goal when his blasting shot was finger-tipped over the crossbar with a stunning save from Paul Ruddy.

One of Norwich’s better players, Wes Hoolahan was replaced by Josh Murphy.Jon Flanagan managed to get himself a caution too. the last thing we need today is to pick up a red and have players facing bans over Christmas. Steven Whittaker came on for Leroy Fer and also Gary Hooper replaced Johan Elmander. For Liverpool, Jordan Henderson was rested up and Luis Alberto came on for a taster. Gerrard won us a free kick 20 yards out and this time, the bogeyman of East Anglia stepped forward and to compound Norwich’s nightmare, Luis took a sublime free kick which sailed up and over the wall and dipped down past the keeper into the corner of the net. It was four for him and he was now well astride at the top of the league’s top scorer;’s list. Both Gerrard and Suarez were having a few shots saved as well. Our attack wasn’t just a one man effort. We were in general doing well, though I feel that there is an over-reliance on Luis’ goalscoring. We have two strong strikers this season but we are yet to start burying goals from other areas.

Into the last ten minutes and Bradley Johnson managed to grab a consolation goal for Norwich when he beat Daniel Agger in the air and headed a well-worked goal. Our defence had very little to do tonight and have agin leaked a goal. Still work to be done. We need more zeros on the scoreline. Steven Gerrard was unlucky not to score an amazing improvised goal as he spun in the air and reversed a ball which beat the defenders but bounced back from the post. However, the fifth soon came. Luis squared to Raheem Sterling to blast it in. It was a well taken goal and eased the loneliness of Liverpool Lou on the Liverpool scoresheet.

Iago Aspas cameoed for the star man at the end when he was substituted to a rapturous reception. It was Luis’ night and at the final whistle the game will be remembered for one man’s devastation. We were back on the march and Anfield truly is a fortress again. Liverpool 5-1 Norwich City.

Man Of The Match: silly question really. Luis Suarez, who missed so many games at the start of the campaign, is now the Premiership’s top goalscorer. His four in today’s match mean he has scored nine in his past three games at Anfield. Surely he is staking a claim for player of the season. The only concern is that the likes of Real Madrid may very well be taking a keen note of his progress. He is head and shoulders above the rest of the world’s attackers. A true legend.