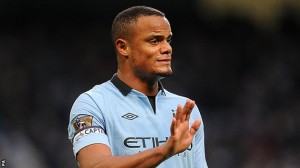 For Liverpool, the lineup was forced into making one change from its successful one in recent matches. Jon Flanagan didn’t make his fitness test and the talented young left back was replaced by Aly Cissokho.

The game was lively from the start, to and fro, both teams looked set out to play a good open game of football. Jesus Navas hit the post with a header after five minutes. The Manchester City defence looked very disciplined and our early attack moves were thwarted as rigorous pressing, good tackling and a very wide formation stopped us in our tracks. Other teams have not forced us to use the whole width of the pitch and have left room to manoeuvre for our wingers down the sides. City stretched us to the max. I thought Raheem Sterling and Philippe Coutinho looked the main danger men. Luis Suarez was being held on a tight leash by the strict Vincent Kompahy, who commands the Man City defence.

After 19 minutes Sterling latched on to a Luis Suarez through ball. Behind the defence he did well in his one-on-one with Joe Hart but unfortunately the linesman flagged him offside so the goal was disallowed. At twenty-five minutes Sterling and Coutinho combined, the Brazilian hitting the ball into an empty net after Hart was rounded by Sterling. One-nil and Liverpool haven’t lost a game when they’ve scored first this season and only one of those games has ended in a draw.

The lead only lasted five minutes. Vincent Kompany totally outmuscled Martin Skrtel as he rose to head a corner past Simon Mignolet in the Liverpool goal. Joe Allen failed to clear from the goal-line emergency defensive position. Philippe Coutinho almost scored a fantastic response in perhaps our finest move all season. Sterling, Suarez and Coutinho all worked well together and intelligently threaded it through the City centre only for the on-form Joe Hart to deny.

On the stroke of half-time Alvaro Negredo gave the home side the lead. Aly Cissokho was out of position and our centre halves were nowhere to be seen. Negredo broke through and with a fairly weak shot, caused Mignolet to make a rare mistake and fumble the ball into the net. Not the best of times to start making unforced errors. Perhaps our luck has run its course? It’s been end to end for the first half and the game could still go either way> Luis Suarez needs to find a way to escape from Kompany’s pocket.

Manuel Pellegrini had obviously been doing his homework on our Uruguayan marksman. Luis Suarez was being closely controlled, which allowed the other Liverpool players a bit more freedom. Our best move early second half saw Jordan Henderson almost latch onto a lovely deep through-ball. Suarez assisted in getting the rebound into Henderson in a goal-line clamour, but Henderson was given offside. Our attacks now have the finesse of a decent Arsene Wenger side – high quality and well-orchestrated total football.

We were dominating possession, having 70% of it early second half. The game was end to end, but no clear chances were developing. We almost had another nightmare in defence, this time Mignolet coming to the rescue as Mamadou Sakho made a shady pass back which was almost intercepted. Glen Johnson became the first player in the ref’s book. Brendan Rodgers made the first use of his bench with a surprise change: Philippe Coutinho making way for Victor Moses, who we haven’t seen in action for a while. I though Coutinho had been more effective than usual today.

Our persistent possession started to pay. We had three clear cut opportunities in the City box. Glen Johnson, Jordan Henderson and Raheem Sterling all going very close. Sterling’s chance was a real gilt-edged chance and he should have really scored it. Luis Suarez seemed to be getting muscled out away from the central areas and was cropping up down the sides. Pellegrini turned to his bench to try and turn the tide a little. James Milner came on for Samir Nasri and Edin Dzeko was brought on for Alvaro Negredo. With ten minutes left, Brendan Rodgers sacrificed Luca Leiva for Iago Aspas.

The referee Lee Mason seemed to be making some erratic decisions which were costly for Liverpool. He failed to award several free kicks and Luis Suarez had two good penalty appeals shunned away. He did manage to put Pablo Zabaleta in the book and Luis Suarez also entered it for a high challenge on Joe Hart.

The last ten minutes drifted away with us getting no closer to bridging the divide. At the final whistle the score stood at 2-1. Yes, a disappointment, especially in a game where we dominated possession. We should have done better with our chances, though there were far fewer of them today. Manchester City dealt with Luis Suarez very effectively, keeping him silenced for the first time in ages. Their winning goal was ultimately lucky and perhaps they didn’t deserve victory but a victory to the Sky Blues it was and their title challenge looks a strong one. Our bench lacked the depth of their much stronger CL squad. It could be a telling factor later on in the season. We still have a home game to come against this side and three points at Anfield will not be beyond us. We drop off top spot. A few sour cranberries perhaps to dullen our Christmas party. It’s a Blue Moon on Boxing Day. Let’s get back on the road against Chelsea next…

Man Of The Match: Vincent Kompany – The Manchester City marshalled a well-run defence, dealing with Luis well and also scored a vital goal. The difference between the two teams and a quality player.