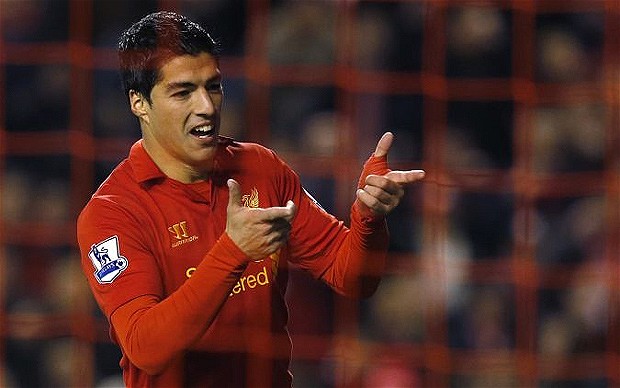 Liverpool began the match with their favoured three central defenders, Daniel Agger still not being able to force his way back into first XI. The game began with a fast tempo with Liverpool passing the ball around well. Suarez was pressurising the West Brom defence right from the outset and after having a few shots go wide, fell under a challenge as he headed into the box, but it was a weak appeal for a penalty and the referee correctly refused to award it. A couple of minutes later though (in the 12th) and heading into the right side of the penalty area, he nutmegged the defender and beautifully slotted the ball past WBA keeper, Myhill. A great start for Liverpool and Luis Suarez managed to break his goalscoring duck against Albion.

Liverpool kept up the tempo and territorial pressure on the beleaguered away side and it only took another five minutes before yet again our star Uruguayan was converting. This time, Aly Cissokho delivered a great cross to the edge of the box where Suarez plunged a fantastic powerful header into the top corner.  2-0 Liverpool.

With 25 minutes gone, a beautifully crafted free kick, from a good position on the edge of the area, culminated in Martin Skrtel slicing the ball from a good goal-scoring position. There was an injury concern when Glen Johnson went down awkwardly while making a recovery tackle against Anichebe. West Brom just couldn’t seem to get into the game and Liverpool were truly dominant. Jordan Henderson almost increased the lead to three with a narrowly missing curling shot just clearing the post.

Just before half time and a long through ball for Nicolas Anelka saw him skip past Martin Skrtel and Simon Mignolet. Having beaten the last line of defence, he passed the ball towards the open goal but luckily for Liverpool, the persistent on-from defender, Skrtel, managed to get back and clear the ball from the line. It was the only real danger of what was an excellent first half for the home team.

The second half got underway and immediately Daniel Sturridge won a decently positioned free kick and went close to scoring with a strong, curling shot, which just skipped wide. Baggies defender, Claudio Yacob, managed to stop another Liverpool attack but went into the book for his efforts and left a free kick to the Redmen. Steven Gerrard delivered perfectly to a virtually unmarked Luis Suarez, who, with his second headed goal, made his hat-trick. Liverpool three goals to the good and well on target to winning the match.

With victory seemingly in the bag, Brendan Rodgers made a precautionary change, replacing Glen Johnson with Martin Kelly. Johnson did take a knock in the first half and it made sense to give him a rest, especially with a big game looming against Arsenal next weekend.

West Brom managed to get a bit of a change in luck when Billy Jones clashed with Luca Leiva in the box. He went down and the referee awarded rather a weak penalty after the linesman flagged. I think it was a poor decision and after James Morrison scored the penalty, this decision could be costly for Liverpool. There is still daylight and hopefully all will be well at 90 minutes.

Steve Clarke seized the opportunity to take advantage of his resurgent team and made two changes for West Brom, bringing on Chris Brunt for Claudio Yacob and Shane Long for Liverpool old boy, Nicolas Anelka. West Brom continued to apply pressure for a good fifteen minute spell. They certainly weren’t going down without a fight.

Our SAS weren’t going to stay quiet, however, and the relatively silent Daniel Sturridge, moving towards the box, did a delightful chip which proved that Suarez isn’t the only star striker we have. It was perhaps the best goal of the game so far and Luis’ goals were certainly all very good.

Suarez soon went close to getting his fourth with a stunning overhead attempt which bounced back off the crossbar. Moving into the final ten minutes and the atmosphere on the Kop was resounding, all enjoying themselves and what must be our best performance so far this season.

A substitution was made by Liverpool with Joe Allen replacing the club captain. Steven Gerrard had a good game with some very good set pieces. In forward areas he was devastating and Lucas’ return made the midfield tick over really nicely. Lucas performed fantastically, sweeping anything up at the back. The final substitution allowed hat-trick hero Luis Suarez get the full plaudits of the crowd he had so vigorously entertained. Luis Alberto came on for the last few minutes.

The fifty year anniversary of our club anthem was sung heartily and ‘You’ll Never Walk Alone’ reverbed through our glorious stadium. The only grey out there today was the weather and Liverpool have showed clearly how far they have progressed since last season. A team who did the double over them last year have been comprehensively beaten. We now go onto the Emirates next week on good form and perhaps we shall really be able to test whether we are true contenders for the title. Liverpool 4-1 West Brom. Our best game so far in this good campaign.

Man Of The Match: Luis Suarez – who can question our Uruguayan hitman’s hat-trick. Truly back on goalscoring form, an awesome display.